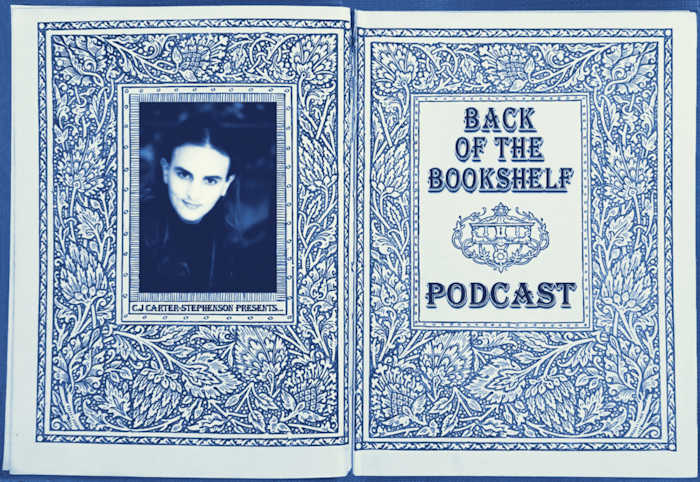 Welcome to the online home of Back of the Bookshelf, a monthly podcast of classic short fiction narrated by author, C.J. Carter-Stephenson. Our mission... to shine a light into the shadows of the past in search of neglected gems. There are no restrictions about setting, theme or genre; the only qualification here is quality, though as the name suggests, the emphasis is on books that tend to be pushed to the back of the shelf, rather than bestsellers.

Prepare to encounter lesser known works by literary giants like Mary Shelley and Guy de Maupassant, and be transported to the fantastical worlds of forgotten pioneers of genre fiction. Episodes go live on the first day of each month and can be viewed or listened to according to your preference right here or any of the following platforms: Spotify, iTunes, Libsyn, YouTube, Google Play Music, Fourble, Stitcher, Podtail, Podbay.fm, Player FM, TuneIn, Castbox. The podcast is suitable for all ages, and the best part is, it's absolutely free. All we ask is that you let us know if you enjoy it by liking, subscribing and spreading the word. Those of you who like C.J. Carter-Stephenson's promotional artwork might also consider picking up some merchandise in our online store, which you can find at the following link:

Our bill of fare as it currently stands is as follows:

Released 1st May 2018.
Inaugral episode, featuring a science fiction story by Sir Arthur Conan Doyle, who is, of course, best known as the creator of Sherlock Holmes. It’s a thrilling adventure starring the brilliant, but hot-tempered Professor Challenger, vividly brought to life by immersive sound effects and a dramatic sensibility.

Released 1st June 2018.
Next up is a Guy de Maupassant story, thematically similar to his more famous The Necklace, but arguably superior with its multifaceted approach. The characters are easy to relate to and with our carefully selected sound effects you'll almost believe you've stepped back into 19th century Paris.

Episode 3 - Into the Sun

Released 1st July 2018.
In episode three, we whisk you away to 19th century San Francisco in an apocalyptic science fiction story from Robert Duncan Milne, originally published in The Argonaut. Fans of classic fiction will find much to endear them in this gripping tale, which features a dramatic balloon ride and a Poe type ending.

Episode 4 - The White Cat Of Drumgunniol

Released 1st August 2018.
It's horror time in episode 4, courtesy of J. Sheridan Le Fanu, author of popular vampire novella, Carmilla. Originally published in All Year Round in 1870, this one is about a family in rural Ireland who are afflicted by a strange curse and is everything a ghost story should be - scary, atmospheric and a lot of fun.

Released 1st September 2018.
In episode 5, we return to 19th century Paris with Alexandre Dumas' A Masked Ball, which was originally published in 1833 in 'Scènes du Beau Monde'. Intrigue, betrayal and heartache are skillfully woven together as the hero ventures into a high society den of debauchery and has a memorable encounter with a woman who clearly doesn't belong there.

Released 1st October 2018.
Few people have had a bigger impact on science fiction than H.G. Wells, our episode 6 author. In line with our mission statement, however, our story, The Cone, comes from his other work, which is less well known. It revolves around the manager of an iron works, who suspects his wife is having an affair. The locations are vividly described and the tension is almost unbearable.

Released 31st October 2018.
In honour of Halloween, our seventh episode features a supernatural story called The Higher Life from the pen of the great Mary Elizabeth Braddon. One of her least known works, it originally appeared in a 1907 anthology called Tales for the Homes. There's something special about Victorian horror and this is a prime example.  Join us now on a thrilling journey to the other side.

Episode 8 - The Legend of Sir Dinar

Released 1st December 2018.
Don your armour and saddle your horse, because in our eighth episode we're journeying back to the age of chivalry courtesy of Sir Arthur Quiller-Couch's The Legend of Sir Dinar. The story was originally published in The Speaker' in 1891. It is about the quest for the Holy Grail, but focuses on a lesser known knight called Sir Dinar.

Released 25th December 2018.
Some people say Christmas is over-commercialised, but for us, it never loses its sheen, so for our ninth episode, we embrace the tradition of the Christmas ghost story with Charlotte Riddell's A Strange Christmas Game. It's set at Christmas, was published around Christmas and is steeped in Victorian atmosphere, so fits the bill perfectly.

Released 1st April 2019.
After a short hiatus, we're back with Baroness Emma Orczy's The Liverpool Mystery. Originally published in The Royal Magazine in June 1902, the story was part of a Sherlock Holmes inspired series featuring a character known only as the old man in the corner, and is a quintessential example of the armchair detective subgenre. Hold onto your hats as we fire up the Back of the Bookshelf time machine.

Episode 11 - The Mortal Immortal: A Tale

Released 10th May 2019.
Have you ever wondered what it would be like to be immortal? Well in our eleventh episode we provide an answer, courtesy of Mary Wollstonecraft Shelley's The Mortal Immortal: A Tale. Originally published in 1833 in literary annual, The Keepsake, it's a story about a man who ceases to age when he drinks a strange concoction created by famous alchemist, Cornelius Agrippa.

Episode 12 - How An Old Man Lost His Wen

Released 2nd June 2019.
The final episode of our opening season in which we proudly present Yei Theodora Ozaki's How An Old Man Lost His Wen for your listening pleasure. It's a punchy little tale of demons and dancing taken from Ozaki's 1903 collection of Japanese fairy tales, The Japanese Fairy Book. Now hold onto your seat as we wave our magic wand and teleport you back to ancient Japan.

Episode 1 - When the World Screamed

Released 1st July 2021.
Kicking off our second season is a special feature-length episode called When the World Screamed. It's another Professor Challenger adventure from the illustrious Sir Arthur Conan Doyle, so takes us full circle back to where we began. It was originally published in two parts in the 25th February and 3rd March 1928 issues of Liberty, a U.S. based magazine, before making its appearance in the U.K. courtesy of the April 1928 issue of The Strand. Challenger is his usual bombastic self and there is a heady mix of action, drama and science fiction.

Episode 2 - Gods of the North

Released 3rd August 2021.
The second episode of our third season is a tale of savage warriors and mystical beings by fantasy fiction pioneer, Robert E. Howard, in whose fertile imagination the iconic character of Conan the Cimmerian was famously forged. Conan was the main protagonist when the story was originally written, but Howard decided to replace him with the character of Amra of Akbitana after it was rejected for publication by the editor of Weird Tales. Heavily influenced by Greek and Viking mythology, it was originally published in The Fantasy Fan in March 1934.

Episode 3 - In the Court of the Dragon

Released 31st October 2021.
Released to coincide with Halloween 2021, this third episode of our second season is an adaptation of a horror story by Robert W. Chambers originally published in his 1895 collection, The King in Yellow. The story is one a group of four which all involve a fictional play called The King in Yellow. It takes place in 19th century Paris and tells of a man being stalked by a sinister being after daring to read some of the play, which is infamous for its tendency to drive people insane. Chambers does an excellent job of building tension and the locations are vividly described.

Released 25th December 2021.
For Christmas 2021, we decided to adapt The Fir Tree by Hans Christian Andersen. It isn’t as well-known as some of Andersen's other stories, but has a bittersweet quality which makes it hard to forget. It tells of a fir tree who yearns to leave his forest home, only to find that life in the outside world does not live up to his expectations, and was originally published in Andersen's 1844 book New Fairy Tales, Volume One, Collection Two (or to give it its Danish Title, Nye Eventyr. Første Bind, Anden Samling).

Episode 5 - A Drama in the Air

Released 1st August 2022.
Episode 5 of our second season is another aeronautical adventure, this time from the pen of the great Jules Verne. It was first published in August 1851 under the title La Science En Famille. Un Voyage En Balloon, but is better known as A Drama in the Air. Interweaving a gripping narrative with some fascinating snippets of ballooning history, it vividly conveys how completely the exploration of the previously out of reach sky had captured the public imagination.

Episode 3 - In the Court of the Dragon - Robert W. Chambers

Episode 5 - A Drama in the Air - Jules Verne

Episode 3 - In the Court of the Dragon - Robert W. Chambers

Episode 5 - A Drama in the Air - Jules Verne